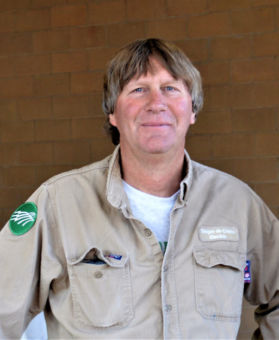 “There’s no better job in the valley,” Douty said. “I’ve loved the work, but I love fishing more.”

Douty’s first day at SDCEA in 1980 was spent as an apprentice lineman with former longtime employees Ray Lewis and Louie Sterle. The three worked on a transformer near Salida in the bitter cold on a February morning, Douty recalled. At the time, there were four lineworkers in Buena Vista. Today, there are six Buena Vista line-workers, the line superintendent and four Westcliffe lineworkers.

Douty later worked as a journeyman lineman, a meter technician and ultimately line superintendent, the position from which he retired. He became well-known and well-liked over the years, a familiar face and contact for many consumers in Chaffee, Lake, Fremont and Custer counties.

Some of the area’s biggest weather events left a lasting impression on Douty, including a snowstorm in 1982. Three to 4 feet of snow fell over one weekend, coming in waves. Power would be restored in one location, only to go out again in another.

In 2011, the area was hit with a wind storm during which 86 poles were blown down. Douty said lineworkers didn’t go home for two weeks while repairs to the system were made. Consumers appreciated and were grateful for the work that was done to restore power after the storm.

“In big situations, people are really happy to see you,” Douty said.

Aside from heading out to camp, fish and hike during his now-free time, Douty plans to spend more time with family, which includes wife Joni; and grown son Justin and Justin’s wife Lisa, who live in Idaho. He also intends to continue to referee high school basketball games throughout the state.

“Dana has a tremendous work ethic and did such an outstanding job of serving our consumers for the past 39 years,” Chief Operations Officer Pat Bernhardt said. “Many of those consumers formed friendships with him over time, while working with him. He’s really represented the company well in our communities.”

“His positive outlook, personality and knowledge will be missed,” Bernhardt added. “I had the opportunity to work with Dana when I started as an apprentice in 1987 and enjoyed his love for linework and the company. He always had something funny to say, so it made work fun. Congrats, Dana.”

Douty will be succeeded by Ryan Doke, who was promoted to the position from journeyman lineman.